Whether you believe in him or not. Whether you call him Santa Claus, Pere Noel, Father Christmas or St. Nick. Whether you buy into his whole naughty or nice routine. You have to admit, the jolly rubenesque man with the white beard who hails from the north is a really strong brand.

Santa Claus is the envy of brand managers everywhere. He represents the ideal when it comes to branding. His brand attributes are clear and desirable to virtually everyone.  Even parts of the world that have no connection to the holiday with which he is associated know who he is and what he stands for. Everyone seems to want to support his mission. And he is in large part responsible for billions of dollars in sales and charitable contributions each year. 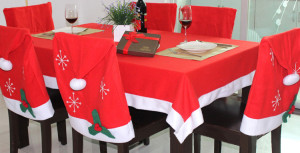 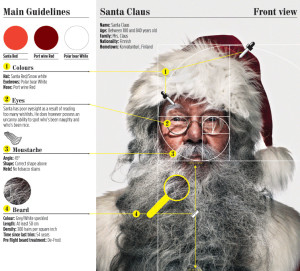 Santa Claus is about goodness. About accomplishing a tremendous amount in a short period of time. He is about hard work. Reward.  Giving.  And his generosity is contagious. Ever play “Secret Santa,” dress up as Santa or sign a card from him? You can see people doing good in the name of Santa throughout the holiday season.

Santa is the model brand. We know what he stands for. His values and passions are clear to us. And they are consistent. I asked a group of colleagues and friends to describe Santa’s brand attributes, and virtually everyone used the same words: Jolly, generous, hard-working, collaborative, giving, fair. Try to yield that kind of consistent response among your customers!

His consistent image is visible everywhere from the local Salvation Army to your next door neighbor’s rooftop; and you will always find him sporting the same look — no matter when or where you see him. Even in the southern hemisphere where most people are wearing sandals and shorts in December, Santa can be found in his standard red suit, floppy hat and black boots.

learn how to uncover your brand

As brand managers, we strive to have that kind of incredible brand recognition, emotional connection and steadfast consistency. Interestingly, unlike most powerful brands, Santa has only a few months to work his magic. And yet in that period of time, his red image is even more visible than the other well-known, red image – COKE – the world’s strongest brand. His brand is so valuable to marketers that he seems to be showing up earlier and earlier each year. I spotted him for the first time this year on 13 October.

Santa always comes with an entourage – his hard-working staff of little green brand evangelists who share the same values, live and breathe the brand and are able to extend his message for him. And everyone outside his bustling workshop wants to get in on the act as well. Retailers, cities, web sites, restaurants, even non-profits want to associate themselves with him. Around the holidays, having a Santa Claus image in your window, on your web site or in your ad is tantamount to having a Nike swoosh hanging outside your sporting goods store.

The Santa brand is powerful, too. His economic might rivals that of many nations. He has his part in producing billions of dollars of sales each year. And imagine the extra revenue he brings in for philanthropic organizations. Whether he’s ringing a bell or he contributes his image to the envelope of a direct mail piece, charities understand the efficacy of this powerful brand association.

During the last few months of the year, he is the world’s most sought after spokesperson, selling everything from soft drinks to electric shavers. And his calendar during this same period includes more personal appearances than J Lo has made in her entire career. You can catch a glimpse of him at virtually any major retailer in cities throughout the world and you will probably find him serving up a hot meal in an underprivileged neighborhood on Christmas day.

Maybe Santa is the world’s strongest brand. And maybe we should study how he does it as we work on our own winning brands.  So, as you are building and nurturing your brand, take some tips from the man in the red suit. Stand out. Be consistent. Create an emotional connection. Remain visible to your target audience. And don’t forget to surround yourself with brand evangelists who can carry your message for you. Whether you believe in him or not, Santa is the model of brand that we can all strive to be.