British entrepreneur James Proud, 23, presents a white sphere the size of a tennis ball covered in a criss-cross pattern. “It is beautiful,” he says, when asked to describe it. “It doesn’t look like a piece of technology. We wanted to make something people actually want to put on their bedside table.” The device, called Sense, and the first made by Proud’s San Francisco startup company, Hello, is the latest in the world of sleep tracking devices claimed to help improve the quality of an activity we spend about third of our lives engaged in. It will be available in the UK early in the new year. 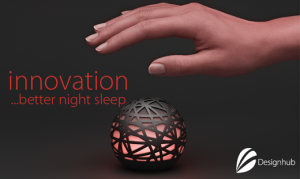 Until now, such devices have only tracked movement during sleep – giving an insight into when you toss and turn – but Sense takes things further by connecting that to the environment. Inside are sensors that record sudden noise and measure light, temperature and humidity in the room as well as the levels of particulates like dust and pollen that can affect sleep. Just telling people how they slept doesn’t fix poor sleep, says Proud. “They need to understand why they slept that way.” Sense also records a sleeper’s movement, but not by requiring that they wear any device to bed, as most sleep trackers including Jawbone and Fitbit do. A small round plastic “sleep pill” clips onto the pillow. It contains an accelerometer and gyroscope and communicates with the system wirelessly. The information that Sense gathers while you are asleep can be reviewed in an app. It includes a rating of sleep quality and a log of the disturbances experienced. If you slept poorly around 2am, Sense can tell you whether that was because of light, outside noise or snoring, for example. Sense allows you to play back the noise disturbances – you can hear whether it was a car alarm or a barking dog that woke you. It automatically identifies snoring. Proud’s team trained the system to recognise the periodic sound by playing YouTube videos of people snoring – though Sense can’t yet distinguish whether it is you or your partner. Over time the device also learns which conditions give you the best night’s rest. It might suggest that you lower the temperature by a few degrees, for example. Waving a hand over the device makes it glow a certain colour, indicating how conducive the room is to sleep. Sense also has a “smart alarm”. It tries to rouse sleepers at a point in their sleep cycle that makes waking easier. The sleep pill detects when they begin to naturally stir and assumes they are entering a light sleep stage where they can be woken without that groggy feeling. Sense doesn’t wake you more than about 30 minutes prior to the alarm, says Proud, and it won’t let you sleep past it. Proud, who began coding at nine years old, was born in south London but came to the San Francisco Bay Area in 2011 after receiving a fellowship from Silicon Valley billionaire and Facebook’s first investor, Peter Thiel. Each year Thiel pays a small group of teenagers to forgo or quit university and start their own business. Hello, founded in 2012, is Proud’s second company. The first – GigLocator, which he started at school to alert people to live music listings – was sold for an undisclosed sum the same year. While Sense is not a medical device, it can give access to information that can help to understand sleep in ways that weren’t easily possible before, says Proud. “It’s up to people to use that information as they wish for medical reasons.” Derk-Jan Dijk, a sleep expert at the University of Surrey, says he isn’t aware of any sleep trackers that have been scientifically tested against their claims but he believes they can be positive in that they help promote an awareness of the importance of sleep. Though he also warns they may lead some people to worry unnecessarily about their sleep patterns. “People may become too obsessed with the data,” he says. Hello, which has raised $10.5m in investment, has more than 30,000 pre-orders for Sense from a Kickstarter campaign. The orders will ship in February. Sales, through the company’s website, will also begin in the US in February and in the UK early next year (pre-orders are currently being accepted from the US only). It is priced at $129.