Two Venture for America Fellows, Steven Mazur and Eric Huang, struggled for years to find shirts that fit well off the rack. Every time they bought a shirt it fit funny. The sleeves were too long. The proportions were unflattering. The fronts hung too low.

They had a problem that major brands couldn’t address: They’re short. Steven is 5 foot 6 inches, while Eric is pushing 5 foot 8.

If you’re anything like me, this doesn’t seem like it should present much of a problem. There are tons of guys who are vertically challenged. It’s a big market. One in three American men are 5 foot 8 and below — which means there are about 40 million short guys out there. How is this problem not being addressed? Only when Steven explained it to me did I understand.

“J. Crew and other major retailers spend millions of dollars building their brands and making their stores cool, shooting fashionable ads and everything else,” he said. “If they had a section called ‘Short and Small,’ no guy would want to be seen shopping there. It would mess with their brand. So they don’t bother.” 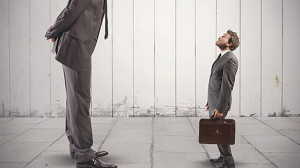 Steven and Eric were so convinced that this was a problem, that they started a crowdfunding campaign for shirts designed to fit short guys. The campaign was a raging success — they got over $27,000 in IndieGogo orders in just a few weeks, leading to their new company,Ash & Anvil, that makes cool apparel for short guys.

Related: Who Is the Target Audience for Your Business Plan? Hint: More People Than You Think.

The story of Ash & Anvil has a number of lessons for aspiring entrepreneurs looking for opportunities. First, if you’ve got a problem, you’re not alone. You’ve likely got a lot of company. Second, own it. One of the reasons this problem has persisted for so long is that short guys have grinned and bore it. Steven tells me stories about shopping in kids’ sections, having to pay the tailor tax to get clothes altered and other things that could be considered trivial but add up. Steven’s a short guy with a big problem to solve.

Third, there are massive limitations to what big companies can do. They can’t undermine their own brands that they spend millions of dollars building. They can’t pursue niches that don’t line up with their core businesses. They’re bad at addressing marginal populations. For an entrepreneur, these niches represent significant opportunities.  Seek out the underserved market segment that’s suffering in silence.

As Steven says, “I know that clothes for short guys isn’t like solving world hunger. But I’ll tell you, as a short guy, it’s a big deal to put on a shirt that makes you feel good about yourself, that you know looks good on you because it was made with you in mind. Creating that feeling for others is now a mission for me.”

Ash & Anvil is going to help a lot of people stand a little bit taller.